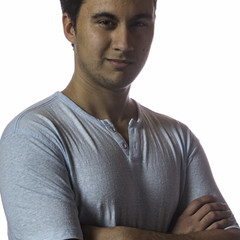 I’m a 3D artist who specializes in hard surface modeling. Video games have always been an interest of mine and I hope to level up my skills with industry experience. I keep myself busy by making games and modeling new and complex objects. I bring jokes and entertainment to any team, but of course work comes first! I also have a dog named Zeus who hangs out with me while I push verts around in Maya which is my preferred software for modeling.

•Has an odd obsession with pastrami